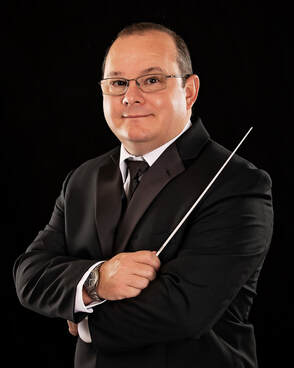 Joey Qualls is currently the Head Band Director at Aledo Middle School and has held this position since 2014. He has been a band director in Aledo ISD since 2005. Prior to his current appointment, Mr. Qualls was an assistant band director at Aledo High School and Aledo Middle School, respectively.  He also served five years as Aledo’s percussion specialist and one year as Director of Percussion.

Mr. Qualls’ bands have achieved consistent UIL Sweepstakes ratings, as well as unanimous first division ratings and “Best in Class” honors at several area festivals. His bands have been named “National Winners” in the Mark of Excellence National Wind Band Honors Project 2015-18 and most recently in 2021.  His bands have also advanced to the CCC State Honor Band Finals twice, placing 8th in 2015 and 2nd in 2020.

In addition to teaching at Aledo Middle School, Mr. Qualls has served as a clinician for area bands, adjudicated UIL/TMEA events and has been a guest conductor at the University of Texas A&M Corpus Christi Summer Band Camp. Mr. Qualls’ professional affiliations include Texas Bandmasters' Association, Texas Music Educators' Association, and the Percussive Arts Society. Mr. Qualls considers himself privileged to teach in Aledo and credits his success to God and to the many mentors, band directors, and teachers that He has placed in his life.  It is their influence, knowledge, and passion that continues to shape who he is as a teacher.  When Mr. Qualls is not at the band hall, he enjoys spending time mountain biking, and playing with his two dogs Jake and Molly. He and his wife, Amy, were blessed with their beautiful daughter, Hayleigh, in November.