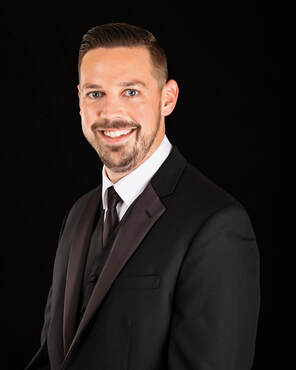 .   Simon Bosch,  Assistant Director
​
Simon Bosch joined the Aledo Middle School band staff in 2014, having previously worked as a freelance musician and teacher in the area. Originally from Colorado, Simon earned a Bachelor’s degree in Music Education from Baylor University and a Master’s degree in Trumpet Performance from Florida State University, where he also served as a graduate teaching assistant for the trumpet studio. Under his direction, Aledo Middle School bands have earned exclusively unanimous first division ratings at UIL Concert & Sightreading Contest, as well as numerous festivals across north Texas.
A strong advocate for music education, Simon has worked with music students ranging in age from 4 years to college undergraduates throughout central Texas and northwest Florida as a private instructor, band director, adjudicator, and chamber coach. He also has 10 years of experience as a participant in the marching arts. Under his tutelage, Mr. Bosch’s students have been very successful in region band and solo contests.
Performing with orchestras, wind bands, and jazz ensembles, Simon has performed at the TMEA, ABA, CBDNA, and ITG conferences. He has made regular appearances in the semifinals and finals of the National Trumpet Competition, including a first place finish as a member of the Baylor Trumpet Ensemble in 2011. He has received multiple commendations from the International Trumpet Guild including the Young Artist Award in 2006, and scholarships to national and international conferences. Simon has had the pleasure of sharing the stage with numerous acclaimed musicians including Barbara Butler, Ingrid Jensen, Terell Stafford, Joey Tartell, Peter Erskine, David Sanchez, Rufus Reid, and Michael Weiss. He has recorded on the Naxos label with the Florida State University Symphony Orchestra, and can be heard on iTunes with the FSU Wind Orchestra’s performance of High Wire by John Mackey. His playing can also be heard on the C3 Big Band’s debut album Personifications.
In July, 2012 Mr. Bosch married his wife Stephanie, who is also a middle school band director, and teaches in Granbury ISD.